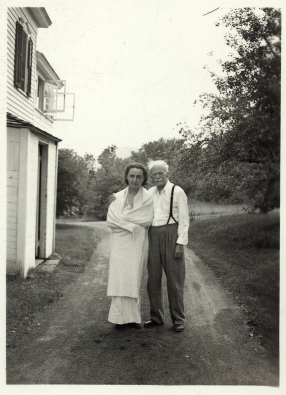 From 1915 until 1946, some 25,000 pieces of paper were exchanged between two major 20th-century artists. Painter Georgia O’Keeffe and photographer Alfred Stieglitz wrote each other letters — sometimes two and three a day, some of them 40 pages long. The correspondence tracks their relationship from acquaintances to admirers to lovers to man and wife to exasperated — but still together — long-marrieds.

The first volume of those letters has just been published. My Faraway One, edited by Sarah Greenough, features 700-plus pages of the couple’s correspondence, sent between 1915 and 1933.

When Stieglitz and O’Keeffe met in 1916, he was 52 and famous — an internationally acclaimed photographer, with an avant-garde gallery in Manhattan. She, on the other hand, was 28 and unknown.

“Stieglitz was the most important person in the New York art world,” explains Greenough, head of the photography department at the National Gallery of Art in Washington, D.C. “And O’Keeffe was a schoolteacher” — teaching art in Texas.

The couple’s correspondence — O’Keeffe’s in sweeping squiggles and curlicues; Stieglitz in thick, decisive slanting black lines — cascaded over the years as their relationship deepened.

“I’m getting to like you so tremendously that it some times scares me,” O’Keeffe writes from Canyon, Texas, on Nov. 4, 1916. ” … Having told you so much of me — more than anyone else I know — could anything else follow but that I should want you — ”

Stieglitz becomes her guide and mentor. He exhibits her work in his gallery, and, unannounced, O’Keeffe visits him in New York. As she’s about to return to Texas, Stieglitz writes to her on June, 1, 1917: “How I wanted to photograph you — the hands — the mouth — & eyes — & the enveloped in black body — the touch of white — & the throat — but I didn’t want to break into your time — ”

He’s beginning to yearn. Miserable in his first marriage, he starts to see her not as O’Keeffe the artist, but as O’Keeffe the woman. Years later, he will photograph her — with what she described as “a kind of heat.”

“Stieglitz was an immensely charismatic person, amazingly egotistical and narcissistic,” Greenough says, “but he had this ability to establish a deep communion with people.”

All I want is to preserve that wonderful something which so purely exists between us.

O’Keeffe decides to move to New York, and before she arrives, Stieglitz writes to her on May 26, 1918:

“What do I want from you? — … Sometimes I feel I’m going stark mad — That I ought to say — Dearest — You are so much to me that you must not come near me — Coming may bring you darkness instead of light — And it’s in Everlasting light that you should live.”

Stieglitz worries that he won’t be able to provide for her. He has no head for business. Still, eagerly, he gets a small studio cleaned and aired for her, and writes: “All I want is to preserve that wonderful something which so purely exists between us.”

O’Keeffe comes to New York, and she and Stieglitz begin living together almost immediately. They marry in 1924. “They were entranced — passionately in love,” Greenough says. “And yet by the mid-’20s, difficulties start creeping into the relationship; you can see the cracks in the relationship.”

O’Keefe deeply wants to have a child, and Stieglitz does not, Greenough explains. The couple lives with Stieglitz’s family, which proves difficult for O’Keeffe. They spend every summer at Lake George in New York with the Stieglitz family, “and that family very much intruded on O’Keeffe’s time to paint,” Greenough says.

O’Keeffe becomes a famous artist — thanks in large part to Steiglitz’s promotion of her. She grows increasingly restless and, according to Greenough, starts making little trips. In the summer of 1929, she decides to go to New Mexico — a seminal decision that will forever change their lives.

“This really isn’t like anything you ever saw — and no one who tells you about it gives any idea of it,” she writes to Stieglitz from Taos, N.M., on May 2, 1929. 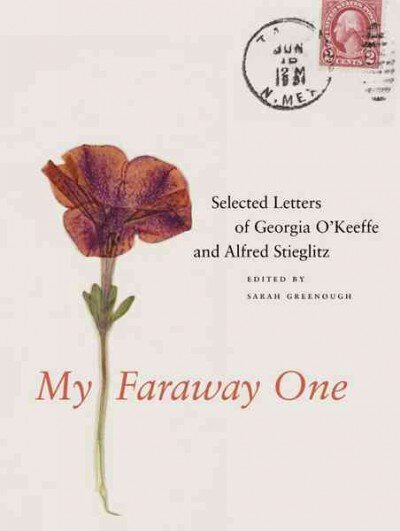 “She is so happy,” Greenough says of O’Keeffe, who was staying with Mable Dodge Luhan, a woman who liked to surround herself with famous artists and writers.

“Mabel’s place beats anything you can imagine about it — it is simply astonishing,” O’Keeffe writes. “… The drive up here — seventy-five miles — was wonderful — It is bedtime and I am not a bit sleepy — not even tired — I lay in the sun a long time this afternoon — the air is cold and the wind — but the sun is hot — ”

O’Keeffe, now 42, is coming alive in New Mexico. She finds the subjects and colors that will place her work in every major museum. Her letters are full of adventures and sunshine. Back in New York, Stieglitz, now 65, falls apart. “I am broken,” he writes, desperate that he has lost her and will never get her back.

After two months in Taos, O’Keeffe explains her time away in a letter dated July 9, 1929:

There is much life in me — when it was always checked in moving toward you — I realized it would die if it could not move toward something … I chose coming away because here at least I feel good — and it makes me feel I am growing very tall and straight inside — and very still — Maybe you will not love me for it — but for me it seems to be the best thing I can do for you — I hope this letter carries no hurt to you — It is the last thing I want to do in the world.

“This letter to me seems to express what any modern woman feels,” Greenough says, “trying to reconcile the desires for work, their art, with a marriage.”

A very modern marriage, which lasts — with changes, variations, temptations, an infidelity and, of course, letters — until Stieglitz dies in 1946. Throughout, each groped for personal and professional fulfillment — and achieved so much. The relationship, from 1915 to 1933, is traced in Volume 1 of My Faraway One: Selected Letters of Georgia O’Keeffe and Alfred Stieglitz.

29 comments on “Stieglitz And O’Keeffe: Their Love And Life In Letters”

Art, photography and beyond

Beat Down But Will Always Rise

Secrets of a lone girl; the life perspectives

Now, Here and Somewhere else

ALL INDIAN FOODS UNDER ONE ROOF

Advance Confidently in the Direction of Your Dreams